Posterolateral corner of the knee 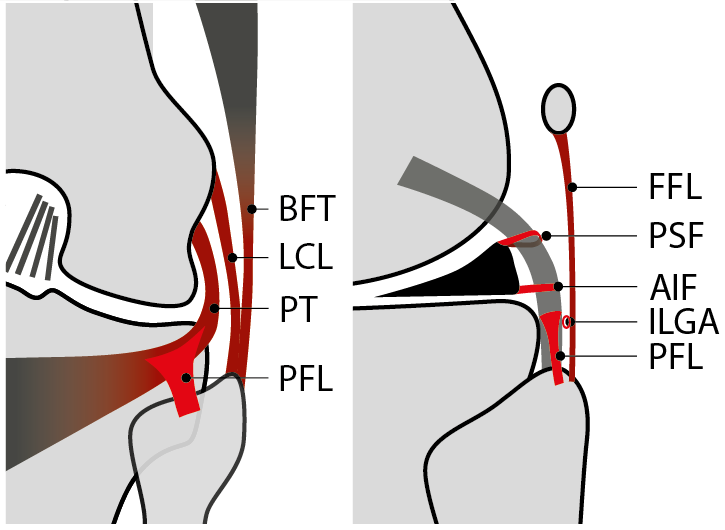 The main stabilizers of the posterolateral corner of the knee are the lateral collateral ligament, the biceps femoris tendon and the popliteus tendon (Figs. [see App]). Since they play a major role in joint stability, it is crucial to detect their injury (Figs. [see App]).
Injuries to the posterolateral corner often occur with tears of the anterior or posterior cruciate ligament. They are particularly common when there are contusions of the anteromedial femoral condyle and the posteromedial tibial plateau. Gaeslin et al. 2010

It can be difficult to identify these smaller ligaments as separate structures (Figs. [see App]). Since they have been shown not to contribute significantly to posterolateral stability, it is not important to clearly assign a posterolateral capsule injury to a distinct ligament. What is important is to identify the injury itself and pay attention to the main stabilizers. Filli et al. 2018

About the Author: W. Fischer

Wolfgang Fischer has been working as a specialized MSK radiologist for more than 20 years. He published the comprehensive textbooks "MRI-ESSENTIALS.COM" and the app MRI-ESSENTIALS. In this blog he informs about new literature and new MRI cases that are being incorporated into the app.
This website uses cookies and third party services. Settings Ok